In 2018, ALDI Australia contributed more than $1.24 billion to the New South Wales economy.

The report, Making a Good Difference: how ALDI contributes to the Australian Economy, not only examines ALDI’s positive effect on competition, but also its wider contribution to employees, shoppers, business partners and its extended supply chain.

The report found that in 2018, ALDI Australia contributed more than $1.24 billion to the New South Wales economy.

“Our journey in Australia began more than 18 years ago with just two stores in Sydney and today we are proud of the impact we have had on driving competition in the Australian supermarket sector,” said Andrew Tindal, ALDI Managing Director of NSW for ALDI Australia.

“Since first opening our doors in 2001, we have focused on offering the best possible value and maintaining our low prices. Today we offer our unique shopping experience to hundreds of communities across the state, bringing career opportunities for locals and long-term partnerships with local businesses, with our stores ranging as far as Cooma and Ballina, to Leeton and Batemans Bay,” Andrew added.

In New South Wales alone, ALDI’s investment in local business totalled an economic contribution of $631 million, with significant investments in products such as bread and beef. ALDI’s business partners employ 3,211 people and partnerships with ALDI have helped these businesses grow and create employment opportunities in local communities.

Family run businesses such as TrendPac, based in Berkeley Vale New South Wales, have benefited from ALDI’s commitment to supporting its local suppliers. TrendPac was founded in 1963 and remains within the same family. It produces products such as mouthwash, shower gel, shampoo and soap. ALDI’s investment with TrendPac now accounts for approximately 50 percent of the business’ output.

“We started dealing with ALDI back in the early 2000’s, and we grew from only a couple of products up to quite a number these days,” said Steven Hyde, Managing Director at TrendPac.

“Our relationship with ALDI has always been a good one. One of the great things is that they have stability with their buying group and that means we get to know what they want, and they know what we can offer,” he said.

But the partnership goes deeper than that, with ALDI working with TrendPac to invest in the future with a focus on sustainability. “We have made the move to using sustainable palm oil and certified materials in line with the guidelines set out by ALDI. Our Research and Development team are focused on making greener formulations so our products are as sustainable as possible, now and in the future,” Hyde said. 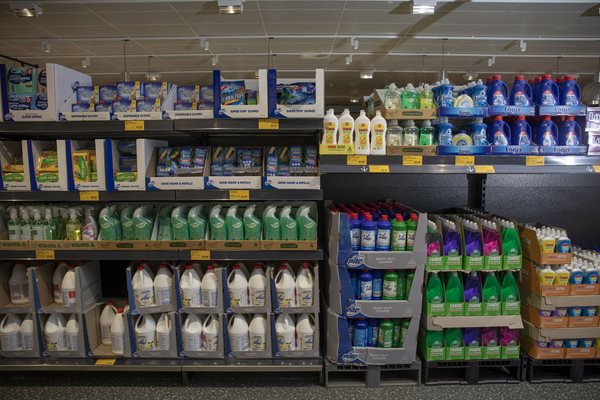 In 2019, ALDI will continue to improve its operations by refurbishing 20 New South Wales stores to its new format. This year will also see ALDI’s product range continue to grow, bringing with it more opportunities to partner with local businesses and offering customers an increased range of Australian made products.

Next
END_OF_DOCUMENT_TOKEN_TO_BE_REPLACED
ALDI News Specials|24 May 2019

Next
END_OF_DOCUMENT_TOKEN_TO_BE_REPLACED
Special Buys Specials|10 May 2019

Save the date: ALDI’s Snow Gear Special Buys are back