Making This Simple Switch Can Save Aussie Families $2,468

As Australian shoppers battle the rising cost of living, ALDI Australia’s 2022 Price Report reveals the savings reward of a trip to ALDI

Today, ALDI Australia has released its 2022 Price Report, revealing just how much families can save by switching their shop to ALDI.

Data analysed by PwC as part of ALDI’s Price Report confirms a staggering price gap of 15.6% compared to the cheapest products at the nearest competitor. What does this mean? Put simply, a basket at ALDI is at least 15.6% cheaper than at other supermarkets, meaning an average Aussie family can save $1,555 a year by making the switch – and that’s if they are already buying the cheapest products at a competitor store.

The price gap widens significantly to 24.7% when comparing ALDI prices to the equivalent branded products, saving the average family a massive $2,468 per year if they usually buy branded groceries. 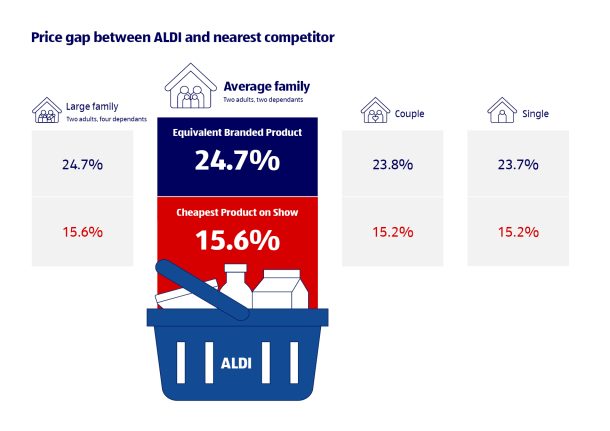 The report reveals that last year, ALDI saved its customers a total of $2.7 billion. Moreover, the downward price pressure ALDI has put on grocery prices in Australia has even saved non-ALDI shoppers over $7 billion since arriving in Australia.

The Cost Factor – Aussies under pressure

These savings couldn’t come at a more critical time. The report found almost all (98%) Aussie grocery shoppers have noticed an increase in the overall cost of items like petrol, groceries and household bills compared to previous years, with over four in five (81%) concerned about the affordability of living costs in the next year. In fact, Aussies are most worried about grocery affordability (51%) second only to petrol (59%).

The struggle is real across the country as two-thirds (65%) of us admit to feeling financial pressure in the past year, with as many as one in three (33%) stating that they are worse-off financially than this time last year.

Price is understandably now the single most important factor in the weekly grocery shop (45%), with half of shoppers taking greater consideration of price in the last year (49%). Keeping a close eye on how dollars are being spent seems to be a top priority, with over three-quarters (78%) of Aussie shoppers reducing their purchases in the last 12 months to save money, with plans to do more of the same this year.

Surprisingly, only one in 10 (9%) of Australians have switched supermarkets as a strategy to save money.

Going out to restaurants or ordering takeaway (44%) and buying meat (39%) are the highest-ranking categories where consumers have already reduced their spend last year to save money. Despite fresh meat being one of the grocery category of the highest concern, ALDI’s data highlights that there are savings of 18% to be made for the average family if they shop ALDI’s fresh meat range. 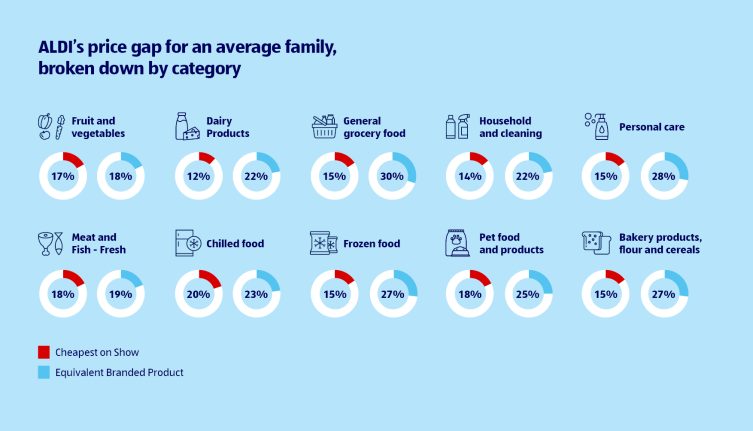 Oliver Bongardt, Managing Director, ALDI Australia says, “This report confirms that the prices of groceries have never been more important to Australian shoppers. Our message is clear – we don’t want to see Aussies cutting down on meat or other loved items because they are now considered a luxury. We know inflationary pressure is real, but this research shows in black-and-white that by making the switch to ALDI, there are real savings available.” Mr Bongardt said.

“Our research shows that the majority (88%) of Aussie shoppers are looking at changing their spending in the next year, and that starts with finding the best deals around. ALDI has always understood the power of price and the value we can bring to Australian customers.

As Australians face the headwinds of increased costs across many household categories – we are here to commit that we will never give up on offering Australian shoppers the best possible prices in the market.  We will maintain our price gap to our competitors, even if some prices on individual items do go up. Every aspect of ALDI in Australia was built to offer the lowest prices in the market from our smaller format stores to our carefully curated range of high-quality groceries.”

“We will continue to deliver the best value groceries to Australians, and double down on maintaining our low price leadership,” he concluded.

Other key report findings include:

Next
END_OF_DOCUMENT_TOKEN_TO_BE_REPLACED
ALDI News Specials|18 May 2022

Next
END_OF_DOCUMENT_TOKEN_TO_BE_REPLACED
ALDI News Specials|18 May 2022